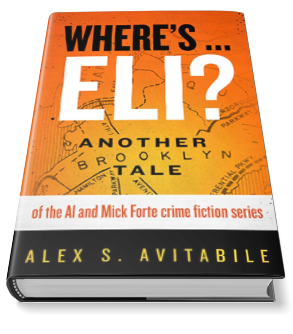 What readers are saying about Where’s…Eli?

“Fans of the George V. Higgins school of crime writing should jump at Alex S. Avitabile’s new Al and Mick Forte book, Where’s . . . Eli?  Avitabile knows Brooklyn, and he has a gift for distinctive voices. I couldn’t get enough of this book.” —William Boyle, acclaimed author of his own tales of Brooklyn: Gravesend, The Lonely Witness, A Friend is a Gift You Give Yourself, and the forthcoming City of Margins

The author’s life growing up in South Brooklyn lends a natural cadence to his writing and patterns of speech – the dialogue between characters is pitch-perfect and makes the reading experience immersive, intimate, and hilarious. The rich cast of characters that parades through these pages is inimitable, but perhaps easily recognized by anyone who’s ever called New York home. The colorful Italian profanity, the casual references to cultural landmarks, and the seamless exposition of the energized city makes the neighborhood a character in itself. Where’s … Eli? is a heartfelt homage to Brooklyn that is clever, irreverent, honest, and downright entertaining.
— Self-Publishing Review

A great book to read if you love Brooklyn
This is a great book to read wherever you are from but if you know Brooklyn, NY and the particular ways of this place, Alex Avitabile’s ‘Where’s Eli’ will bring you pure delight. The quality of his writing is superb. One of the aspects that makes this story so engaging and enjoyable to follow is the wonderful descriptive details that are totally specific to Brooklyn. The language is also so accurate and precise that even though I live 3,000 miles away, I left like I was right in Carrol Gardens or on Court Street when reading chapters. The style and energy that runs through the development of each of the core characters is infectious. It is really fun and motivating to read Alex’s new book and laugh out loud at all the antics of the Al and Mick Forte crime fighting team. The only way it is possible to make a reader enjoy a book this much is if the writer had just as much fun writing it. This is definitely true with ‘Where’s Eli’ as the story arc and momentum of the series suggests there is plenty more daring crime fiction to come from the best borough in the world… Bklyn!
—by ld372 (Amazon 5.0 out of 5 stars)

Fun adventures and signature wit
A truly engaging story and fun adventure from Avitabile. I enjoyed returning to my favorite characters- Al and Mick- in this 2nd book in the series. This is a quick and enjoyable read to which Avitabile brings his signature wit and dialogue-driven style.
—by Amazon Customer (Amazon 5.0 out of 5 stars)

Finally published!!
First and foremost, a large thank you to Reedsy Discovery and Alex S. Avitabile for providing me with a copy of this publication, which allows me to provide you with an unbiased review.

Having devoured the debut in the Al and Mick Forte series, I could not wait to see what else Alex S. Avitabile had in store for readers in this follow-up piece. Full of drama and some not so legal language, Avitabile entertains the reader throughout. Al Forte has a great relationship with his cousin, Mick, to the point that he is willing to help in most situations. When Eli Ativa arrives at Forte’s office, Al is willing to loan out his laptop to a fellow lawyer, though only after a little negotiating. Eli, cousin to Mick on their mothers’ side, has never posed any issues to Al before and the laptop arrives back later that day without an issue. When Al receives some calls from his bank the following day, he is baffled to learn that his accounts have been emptied, including client escrow accounts for his real estate transactions. Al is beside himself, particularly when he discovers the account draining occurred while he was fast asleep, his laptop off and in the next room. Eli is also MIA, leaving Al to wonder if there is some degree of guilt to be laid at the feet of Mr. Ativa. When the bank refuses to back Al’s version of events and the New York Bar sends notice of an upcoming hearing, Al engages the services of his cousin to help find Eli and get some answers. The timeline of Eli’s period with the laptop is sketchy, but a waitress at the local coffee shop might be able to shed some light on everything. Eli remains on the lam, only helping to further insinuate that he is guilty of something. When the day comes for Al Forte to face the charges of mismanagement of the escrow accounts, the hearing takes an interesting twist, revealing a truth that no one could have seen coming. Another good legal thriller by Alex Avitabile, which reads with ease and it lighter fare than I am used to tackling. Recommended to those who have an interest in novels that can be devoured in short order, as well as the reader who enjoys a unique legal thriller.

I was pleased yet again with the second novel in this series, allowing me to acclimate to Alex S. Avitabile’s writing style and a handful of his characters. Al Forte returns and is apparently happy to be working in real estate—after a harrowing experience in the debut—wanting no trouble or waves in his practice. When he becomes the victim of financial ruin, he turns to the only man that might be able to help, less to solve things violently and more to get some answers. Avitabile uses the story to show the gritty and determined side of Al Forte, especially when his back is up against a wall. Refusing to accept defeat, Al does whatever he can to clear his name, sure that he will be disbarred otherwise. Other characters emerge throughout this piece, some returning characters and others new to the scene, all of whom keep the narrative moving effectively. The entertainment factor is increased with many of these characters, some of whom provide the stereotypical mobster mentality. While Avitabile seeks not to create a hard-core legal thriller, he entertains and keeps things serious enough to show how the law works when the cogs run effectively. Avitabile conveys his point through a mix of chapter lengths and legal angles, which keeps the reader wanting to read a little more. I was able to read this in a single day—and I did the debut—and am eager to read more, should Alex S. Avitabile have additional ideas he wishes to publish down the road. I hope others will take the time to look into these books when they need something shorter that does not dilute the legal issues at hand.

Kudos, Mr. Avitabile, for this great series. I am quite intrigued and want to know more about both the Forte men in the coming months. —By Matt, a Reedsy Discovery reviewer

Crime never pays – especially in Brooklyn
Like the first book, this was a perfect read for a weekend away (I couldn’t put it down). I thoroughly enjoyed reading the latest escapades of Mick, Al and Eli too. Although I’m not from Brooklyn, Alex makes it so alive in his pages that I find myself wishing I were. These books are a must for anyone looking to escape for a few hours to do a little crime/problem solving. Looking forward to their next adventures!!! —By EPC (5 of 5 Stars Amazon Review)

Mick and Eli are better, the second time around…
Back in the days “when Brooklyn was the world,” the Abe Stark clothier sign in Ebbets Field read: “HIT THIS SIGN. WIN A SUIT.” Alex S. Avitabile hit it out of the park again with WHERE’S ELI?

It’s said that James Joyce memorialized Dublin with ULYSSES, and if the city were wiped from the face of the earth it could–By be recreated from the ground up by a Joceyean literary pub crawl.

In light of Avitabile’s longtime involvement in poverty law and affordable housing, his reference to Bedford Stuyvesant strike me as enlightening.

I intuited an echo of the author in the description of Eli B. Ativa himself: “…he’s always wearin’ that ratty looking Brooklyn Dodger hat, worn jeans and sneakers in winter; T-shirt, shorts and sandals with no socks in summer. That describes my ______ cousin, Eli B. Ativa, in a nutshell” (p. 120).

As a native son of Brooklyn, the borough of “Amalgamated New York” that lays claim to 1/7 of American citizens, I found Avitabile’s latest effort to be delightful.

I hope he follows up with a proposed treatment of Bill Withers.

A Rollicking Read
Fast paced, intriguing characters and rich, colorful dialogue; NSFW language. The read is funny & highly interactive: I find myself in chorus with Mick, chiding Al to get a move on finding Eli while I look up & groove to the historical R&B reverie enriching the narrative.
— by rylwats  (5 of 5 Stars Amazon Review)

Another gem!
Another gem from Alex Avitabile! This is dialogue-driven crime fiction at its salty best. It is a lovely part 2 in the Mick and Al series but stands solidly on its own. This was lots of fun to read. — Gb (5 of 5 Stars Amazon Review)

The Saga Continues….
This is a great read, a worthy follow up to Occupational Hazard and a real page turner. Readers might benefit from first reading Occupational Hazard, the first in the Al and Mick Forte series, but it is not absolutely necessary – the author does a fine job in introducing Where’s…Eli readers to pertinent characters we already met in the first installment. —by Joseph S. Dirr (Amazon 5.0 out of 5 stars)